is the 39th edition in 2015. You can participate as a runner of course if you sign up a year in advance, as a volunteer or just turn out to cheer the runners on. This year the race takes place Sunday, April 12th.

The Schneider Electric Paris Marathon is now one of the biggest marathons in the world, as much for the size of its field as the performances of its runners. Nearly 140 nationalities and 54,000 runners come to tackle this race across Paris, taking in the Champs Elysées, the Bois de Vincennes and Boulogne, with spectacular views and landmarks all along the route. There are now more than 16,000 runners from abroad, making up 35% of the field. Each finisher comes home with incredible memories. Here are long-time Paris resident Shari Leslie Segall’s reflections on last year’s race.

Another one down. Another notch on the aglet (that little plastic piece at the end of your shoelaces [these are tiny notches]). Another finish line crossed. So what were the sights and sounds, focuses and distractions, agonies and ecstasies of the Marathon de Paris vintage 2014 (and some that preceded it)?

Pass me the lunettes de soleil. Yes, the new fluorescent fabrics being used for running shoes and clothing is brilliant because it’s brilliantin the drivers-can-now-see-you-from-kilometers-away-when-you-run-at-4:30-AM-or-midnight sense of the word. Yes, they make us wonder why somebody didn’t think of this decades ago, when pounding pavement in the pitch black meant bedecking yourself with all manner of adhesive reflective strips and jerry-rigged miners’ lights. Yes, that hot pink is just beautiful and the yellow makes you smile. But with a fluorescent something-or-other from shoelaces to entire unitardsflashing out from tens of thousands of bodies all crunched together in one psychedelic clump, some of us had the feeling that our retinas were being burned!

Calling all microbephobes! There’s nothing like 42.195 kilometers of hunger pangs and dehydration for transforming the most hardened germphobes into carefree communalists. No matter how many sweat-encrusted hands (we hope it’s only sweat!) have plunged into that container of raisins at the refreshment station, no matter how many alien mouths are sharing that passed-around bottle of water as the temperature starts to rise mid-race, you’re in! You might drink hand sanitizer for breakfast every other morning of your life, but on M-Day you’ll give your body anything it needs to get to that next km-marker.

Quick! What’s your favorite kilometer? Answer: None! None. Not one of the 42.195 kilometers do I like. Or do I even not actively not like. OKmaybe the mid-point, km number 21.0975, because by then the winner is already home eating pizza and the spectators can tell us back-of-the-packers which Kenyan or Ethiopian it is. But for all the effort I’ve put into the 26 I’ve run, for all the years I’ve spent defining myself as a marathoner, for all the reverence I feel for the mythical distance, the kilometer that’s really my favorite is the one ridden on the bus between the crossed finish line and my own post-shower pizza-eating. I run marathons so that I can have run them. As for the race itself, it’s a blur of fear (the beginning: with those 42.195 ks starin’ straight down at you), frustration (the middle: when you’ve come far, very far, but it’s still not far enough) and fatigue (the end: otherwise spelled p-a-i-n).

Strike up the band! San Diego has its legendary Rock and Roll Marathon, with groups gloriously grinding out glowingly golden oldies at each grueling mile. New York Marathon runners cruise to the chords of choir-robed choruses in Harlem and string quartets near Central Park. But it’s hard to lick the musical diversity that pushes, pulls, inspires, goads, catapults Paris Marathoners kilometer after kilometer along their increasingly challenging route. From gatherings of staid gentlemen blowing hunting-horn fanfares in classical green-velvet suits to troupes of bouncy transvestite cheerleaders kicking to beats in day-glo wigs to packs of pounding drummers pacing your heartbeat in traditional batik garb to (my favorite) Mick Jagger belting out brooding blues from a sound truckand seemingly every musical genre and genius in betweenit’s sometimes easy to forget that, in some cases, you’re not even at the quarter-way point!

Shari is running again this year – you’ll recognize her as the one wearing the FUSAC cap! Come on out with your hunting-horn or Mick Jagger on the boom box and cheer her on!

Get your own FUSAC cap 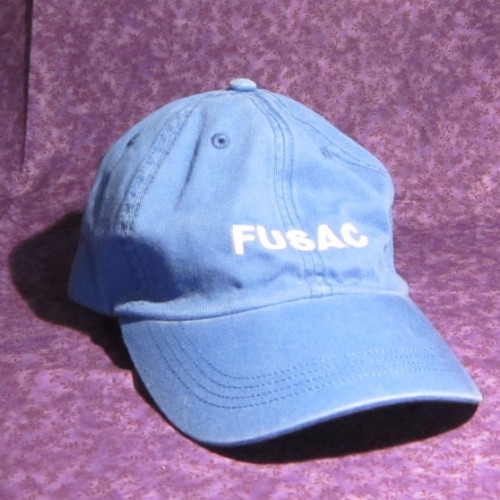